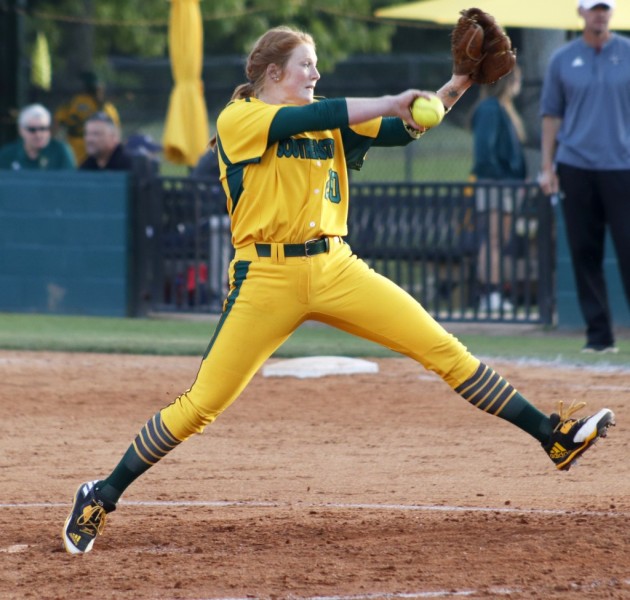 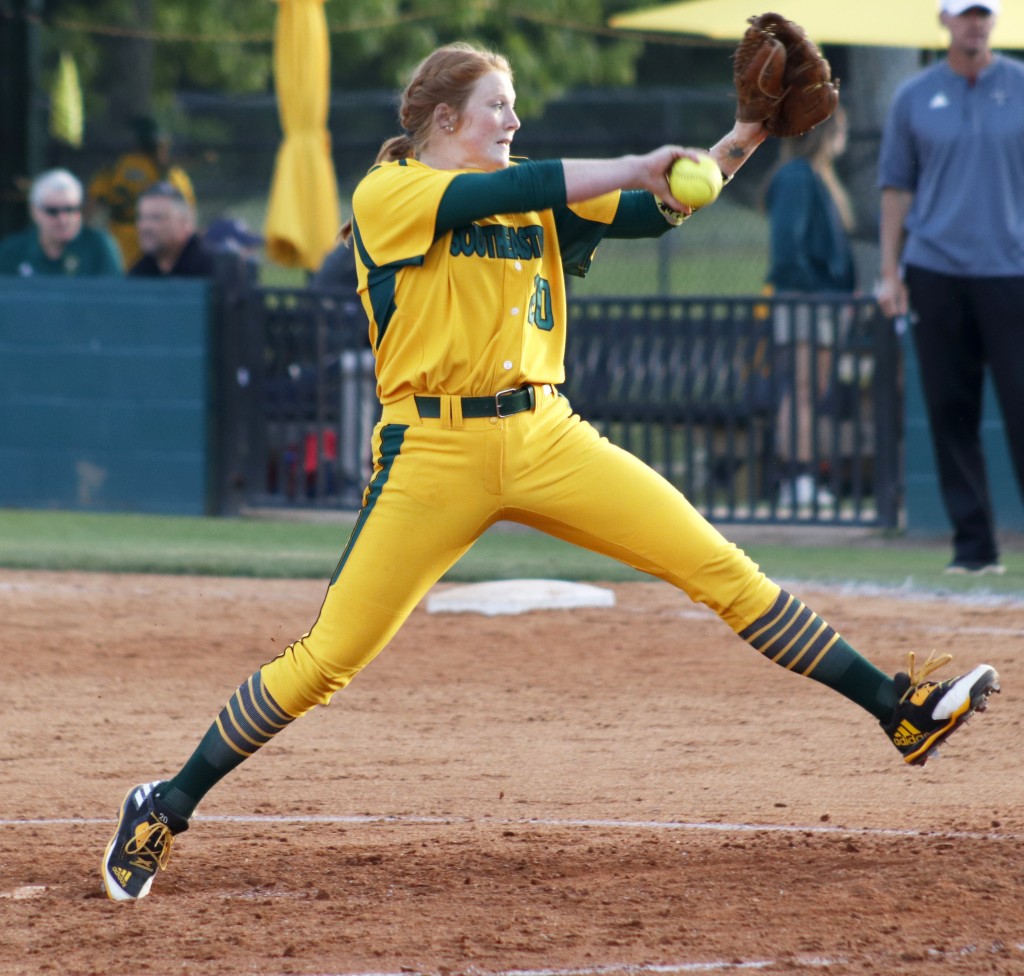 Senior pitcher Rachel Hayes pitches from the mound against the University of Louisiana at Lafayette. She conceded six runs during the game against Ragin’ Cajuns. Nikisun Shrestha/The Lion's Roar

The Lady Lions softball team bounced back from a 13-2 loss to the University of Louisiana at Lafayette in six innings with a series sweep against Northwestern State University.

The sweep concluded a five-game week for the Lady Lions where the team had four wins and a loss.

Head Coach Rick Fremin described how the team coped with the busy schedule.

“Obviously, that’s always tough,” said Fremin. “We had a rain-out makeup game yesterday against ULM on the road. We had a good win on the road against a good team. We just wanted to bring that momentum here back home to play a ranked team and try and get after them. It didn’t work our way. We just gotta regroup tomorrow, clean it up and be ready to go against a great Southland Conference opponent.”

Former Lady Lion and senior outfielder Kalyn Watts had three RBIs and a home run in her return to Hammond with the Ragin’ Cajuns. Watts’ performance propelled the Ragin’ Cajuns to a win, much to the disappointment of the Lady Lions.

Fremin was disappointed with the lack of aggression from the team throughout the game against the Ragin’ Cajuns.

“I was very disappointed in the team tonight,” said Fremin. “Obviously, in the first inning, we were very aggressive, pushed out two runs across. That’s our style of play, and that kinda went away for the rest of the game. I thought the pitchers did a poor job tonight. I told them they’ve got to do a better job.”

Senior outfielder Maddie Edmonston described the loss as ‘pretty embarrassing.’ However, she was optimistic about turning things around.

“We have a great team,” said Edmonston. “We are capable of doing a lot of great things. We can be inconsistent, but we can also be an awesome team. So, as long as we bring the team that is focused, ready and mentally prepared and bring the bats with us, we can prove a lot of people wrong.”

The two non-conference games at Monroe, Louisiana and at home prepared the team for their travel to Natchitoches for the Northwestern State series.

“Coming into this week, I was happy to have five games,” said Edmonston. “I think that’s a good practice to get ready for this coming series. We have a big series against Northwestern. So, I thought seeing live pitching two times before that and getting to play live games would be great practice. We still have a practice tomorrow. We’re gonna work hard, and we’re gonna leave this in the past.”

Edmonston described the importance of the win at Northwestern against conference opponents with the team looking for postseason play.

“Last year, it was really tough,” said Edmonston. “All the returner, we know how it is. Missed it just by one game. That’s heartbreaking. Anytime we drop a conference game that we know we should have won, that really hits us hard because we know just one game away, it can really hurt us. We just have to stay on top of the rest of these games that we have. Come out winning series, winning games.”

The team will face Jackson State University in a doubleheader today starting from 3 p.m. before resuming conference play against University of Central Arkansas on Friday, April 20.