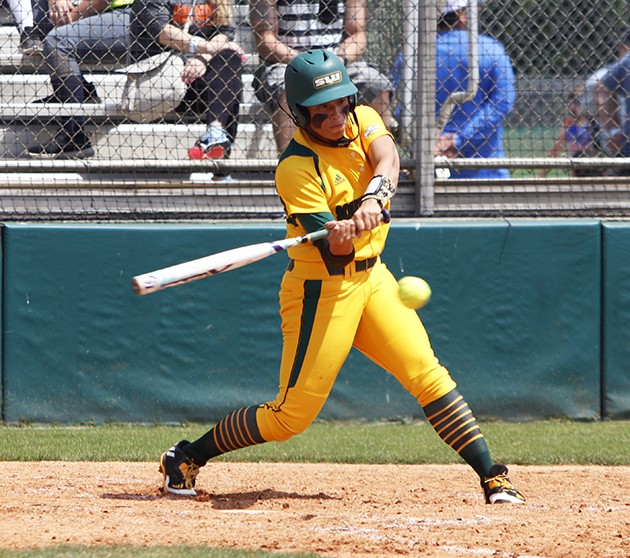 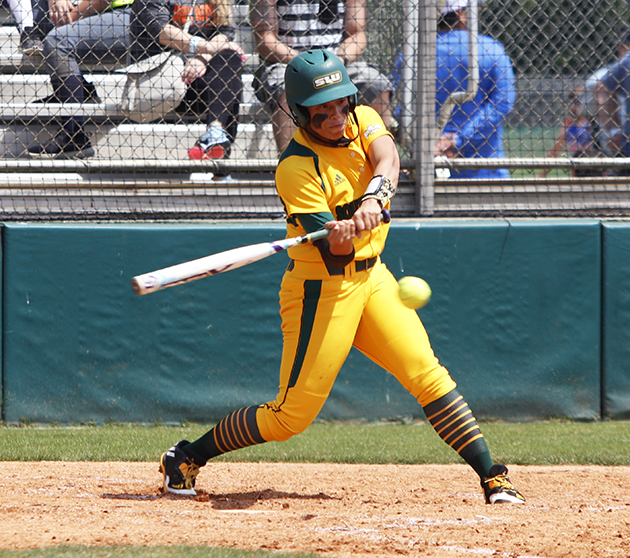 Senior infielder Mahalia Gibson takes a swing at bat. She had two RBIs in the series against University of Central Arkansas. Nikisun Shrestha/The Lion's Roar

Softball Head Coach Rick Fremin recorded his 400th career win against Jackson State University to go along with the series win against the University of Central Arkansas over the last week.

Fremin shared his pleasure of getting a victory over a competitive team in UCA.

“UCA is a very respectable team,” said Fremin. “They won the conference a few years ago. They are in postseason play in the tournament every year. Coach Kuhn has been there a long time. He does a great job. For us to be in year three and possibly on track to go over the 30 win mark in the season is a big deal. I’m very pleased with where we’re at right now, and hopefully, we can stay healthy and continue our consistent play.”

Fremin shared that the team has elevated their play in the recent games where they have won seven out of their last eight games.

“I think the team has stepped it up with consistent play,” said Fremin. “I think that they have done a phenomenal job with our game plan and executing our game plan.”

Senior infielder Mahalia Gibson credited the winning momentum to the team’s aggressive mentality. She shared how Fremin has reminded the team about their playing style over the season.

“In the beginning of the year, he would say people would come to him and ask him why we would win and he said, ‘It would be because we’re aggressive,’” said Gibson. “So, we just need to get back to that, to the kind of team we are. We just need to remind ourselves that’s who we are and that’s how we play.”

The series decider against UCA went down to the third game after a loss in the second game of the series. Gibson explained how the team picked themselves up for the rubber game.

“Our hitting performance went very well by knowing that we needed to come in with fire ’cause yesterday, the second game, we thought we dropped one,” said Gibson. “So, today we came in with more fire. We knew we needed to attack quicker and just get on top.”

Senior pitcher Rachel Hayes pitched a shut out in the rubber game. Hayes believes the team effort in defense and the productive batting display were the keys for the team’s victory.

The seniors will get one last chance to represent the team at home against Southern University and A&M College on Tuesday, April 24. Fremin hopes to give the seniors a send off in the game.

“We got a little weather rolling in, so we gonna get the tarp on the field,” said Fremin. “Hopefully, get that game in, allow them to have a great day, recognize them one last time, thank them for everything they’ve done. I really wish I had them one more year. I’m gonna miss this group. It’s the best senior class I’ve ever had.”

Hayes described her expectations from her final home game as a Lady Lion.

“The last game’s probably gonna be emotional, but I’ll be OK,” said Hayes. “We’ve been really good this season. We’re not done yet. I think we’ve just kicked it into gear. We’re doing our job the way we’re supposed to. It really helps that we’re all coming together.”

The team wraps up the season with two road series. Fremin gave his thoughts on the upcoming series.

“Gonna be two very tough road contests,” said Fremin. “At Sam Houston, coach Brock is retiring. He’s been there a long time. This is his last year. McLeod is a great pitcher. She does a great job of elevating the ball in the zone. So, we’re gonna have our work cut out for us over there, and they’re pretty good at home.”

Fremin described the team’s approach to the final series of regular season against McNeese State University.

“They won the tournament last year,” said Fremin. “They’re hosting the conference tournament this year. They’re gonna try to finish the year strong. That’s an in-state rival game. So, hopefully, we can go over there and give them everything that we got.”