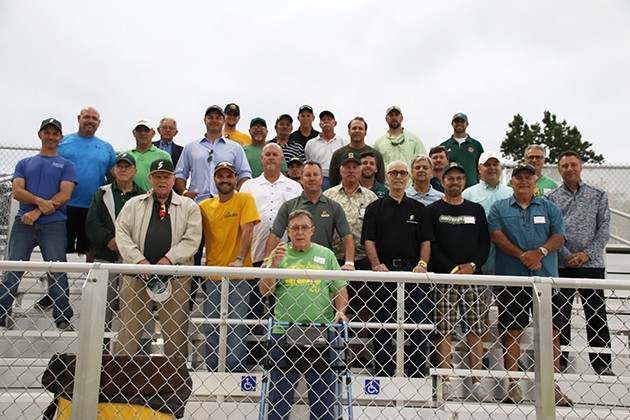 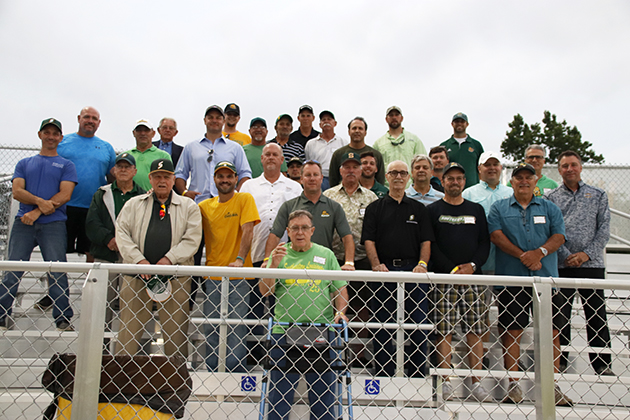 The university's baseball alumni came in to support the program in the series against Nicholls State University. They were recognized on Alumni Day on Saturday, April 21. Nikisun Shrestha/The Lion's Roar

The Lions baseball team returned to winning ways with victories over Nicholls State University in the doubleheader last weekend.

After losing three consecutive games against Northwestern State University, University of Southern Mississippi and Nicholls, the team bounced back with a series victory on Saturday, April 21.

“It was good to just see our edge back,” said Head Coach Matt Riser. “That was the biggest part of this. We had an attitude about ourselves, had some resilience about ourselves.”

The third game of the series against Nicholls marked Alumni Day. Riser described that the baseball alumni motivated the team to victory.

“I loved it,” said Riser. “I thought it inspired our guys to play good Lion baseball, the way we know how to play, the aggressive style we play. Obviously, the mentality we play with ’cause they always wanna make those guys proud. They know that they’re the ones that laid the foundation and have a big part in building this program to where it’s at now. They did a really good job of being inspired by the alumni out there.”

Junior Cody Grosse shared his thoughts on the alumni coming to support the team.

“It was sweet,” said Grosse. “This is my first year here. It was sweet to see those guys come back. It’s good for the program.”

Grosse had two RBIs from four hits that helped the Lions clinch the series against Nicholls. He gave his thoughts on his performance and shared the team’s need to build a winning momentum from here on.

“Today was good,” said Grosse. “I started hitting again. We just got to keep it rolling.”

Ahead of the doubleheader against Nicholls, the Lions had one win over the last eight games. Riser described the importance of the wins and the performance of his team’s offense.

“It was vital,” said Riser. “We had our backs against the wall. Obviously after losing yesterday, a tough one at home and just the way we’ve been losing the ball games, not being able to score enough runs, just excited on how the guys came out. They did a really good job of handling some moments. We finally get that offense going. We talked about it. If we can get that offense to go at all, this club is scary.”

Grosse believes the difference between winning and losing is the team’s mental approach to the games.

“I think it was kinda in our head, nothing skill wise or anything,” said Grosse. “We just got to go out there with the right mindset.”

Riser explained his plans for the remaining games this season.

“We got full staff in the bullpen,” said Riser. “We can play bit more matchups on our end of it, make some changes if we need to just have some guys, some better roles to be successful. It’s gonna give us an opportunity to make a run down the stretch, which we’re gonna have to do. If we wanna make a run to the conference tournament or the conference championship, we need not only series wins but a few sweeps as well. I’m excited about it. The opportunity’s definitely gonna be there for them.”

The Lions will host Stephen F. Austin State University for a three-game series, which starts on Friday, April 27. The last game in the series is Senior Day.