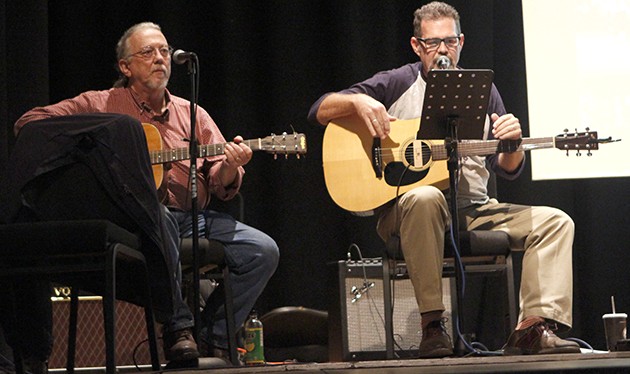 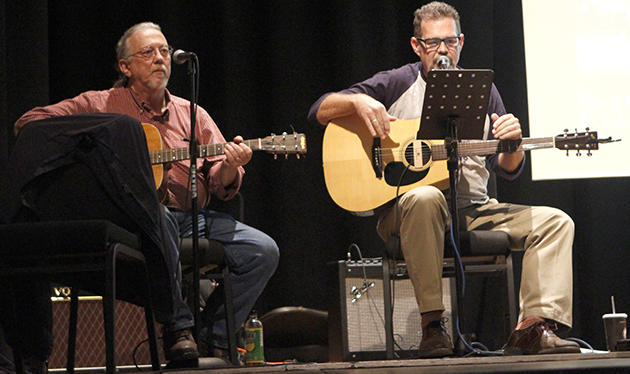 Before starting his lecture, Dr. Joe Burns, a communication professor, held a mock Presidential Election that resulted in a slight preference for Donald Trump.

As part of the final week of Fanfare, Burns presented a lecture called “Make the Presidency Rock Again: The Success and Epic Fails of Campaign Theme Songs,” giving a brief history of campaign songs that included lists of the best and worst campaign songs used throughout history. Burns’ lecture was held on Wednesday, Oct. 26 at 1 p.m. in Pottle Auditorium, and included a performance by his band, Impaired Faculties, beforehand.

Throughout the lecture, Burns played a piece of a campaign song and then explained why it was so good or bad.

“I really liked that he included all the music so we could actually hear it,” said Sidney West, a junior marketing major. “He made it super interesting and exciting for everyone to watch.”

The music was a big hit with the audience because of Burns’ structure of the lecture.

“I like how he incorporated the music with it to show examples of the type of music that they used for the elections,” said Brielle Garner, a sophomore communication major.

Burns began his lecture by walking out wearing a pro- Donald Trump shirt, then changed into a pro- Hillary Clinton shirt, then finally settled on a neutral band shirt.

This spirit entertained the attendees, while also making the lecture more relatable to them.

“I think it was relatable,” said Isabella Vazquez, a junior political science major. “I think it was personal. It was never boring. It kept me on my toes.”

Burns’ personality spilled over into his lecture as he added humor to the lecture.

“I’m of the opinion it’s gotta be more than a lecture,” said Burns. “I’m gonna get people to come, and I’m gonna be on a stage. Things have to happen. If I could use pyrotechnics, I would. That’s why we had the music to begin with. It’s gotta be more. I adore this. There’s nobody who likes the spotlight more than me.”

With the election coming up, Burns wanted to show students that campaign songs have always been around and to show the shift in behaviors of current political candidates.

“A thing I like to push to my students, what I tried to push with Martin Van Buren, “it’s never been this bad. These two people hate each other, ‘Oh please, it has been this bad from the get go.’”

Burns opened with his band and brought his children out on stage before, played music, made jokes throughout and even had a balloon drop at the end of his lecture.