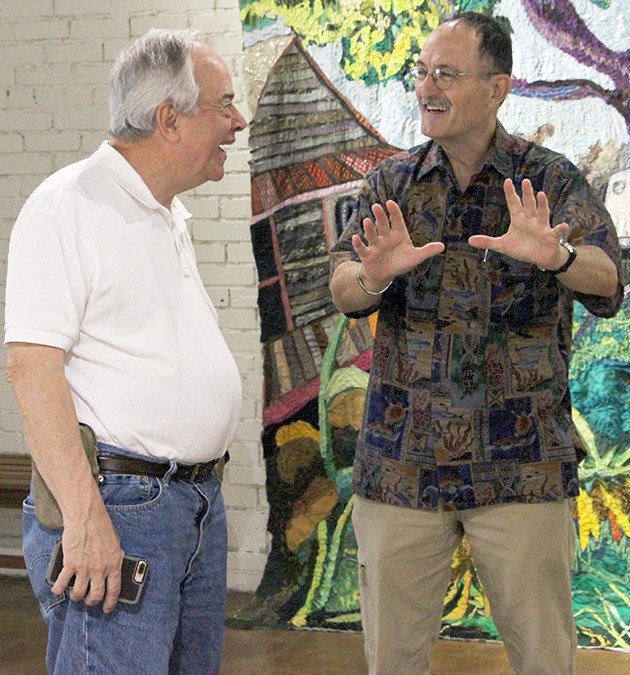 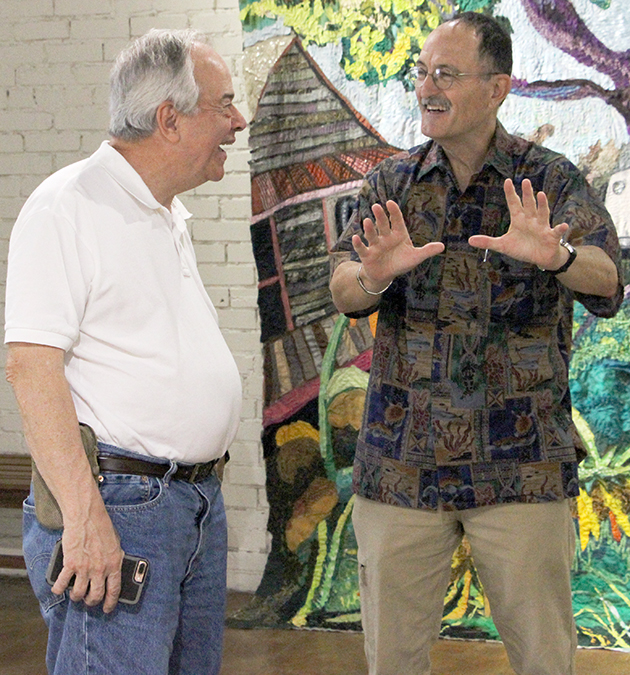 The opening reception for the exhibit was held on Apr. 7 from 5-8 p.m. and will be on display through Apr. 28.

Phillips got started in art at an early age while growing up in Kentucky.

“My family were folk artists, mechanics and musicians,” said Phillips. “I grew up in the country. We had our own junkyard that I used as raw material for making my own environment, so that’s how I became an artist. Then, I went to University of Kentucky and got my BFA there. Then, I moved to New Orleans in the mid-nineties, and I got my MFA at Tulane.”

Phillips’ personal favorite was “Fort Dirt Hole” which was a portrait of a young girl on a farm with an old lady playing guitar.

“I love ‘Fort Dirt Hole’ which is the big piece in the show,” said Phillips. “It’s an autobiographical piece. It’s a self-portrait and it’s a portrait of my grandmother. It combines imagery from Kentucky and Southeast Louisiana, and it’s based on a childhood memory.”

Attendees praised “Fort Dirt Hole” for the way it makes viewers feel like they are in it.

“I think it’s pretty amazing,” said Denise Tullier-Holly, a lifetime board member of HRAC. “What she gets from working with fabrics and sewing machines is just extraordinary. The faces, the texture, but when I go to that huge one where you feel like you’re in somebody’s cornfield or at somebody’s farmhouse listening to somebody play the guitar. It’s just overwhelming. All the different textures. The colors are so vibrant. It’s just lovely.”

“Fort Dirt Hole” holds personal significance to Phillips in its meaning and has been featured in several art museums.

“This was a big piece, an important piece for me,” said Phillips. “I made it for a 20 year retrospective that I had at the Ogden Museum of Southern Art a few years ago. It was also featured in the State of the Art show at Crystal Bridges Museum of American Art in Bentonville, Arkansas.”

Tullier-Holly enjoyed the way the artist layered different art media into one piece.

“It’s just amazing,” said Tullier-Holly. “She’s got figures in there. She’s got plant lifeforms, clouds, sky. It’s all in this beautiful remnants of fabric, and then overlaid on top of that she’s got her sewing machine work. But she’s also got this ribbon that’s woven in. There’s jewels and it’s just remarkable. I think it’s just wonderful work.”