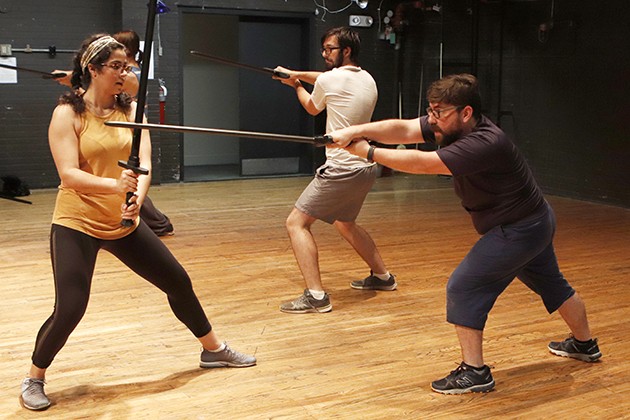 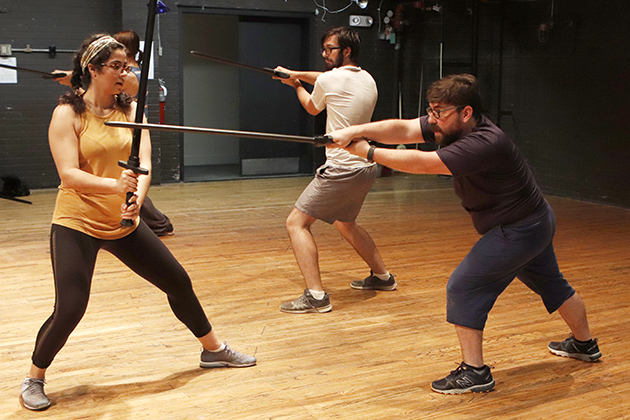 This semester marked the first time that the university offered a Stage Combat Workshop where people could receive a certification from Dueling Arts International, which trains individuals worldwide in theatrical combat and related theatrical movement.

“The Stage Combat Workshop is an intensive two weekend 16-hour training for anyone from beginner to intermediate level on how to use a broadsword for the stage, how to use stage weaponry, and how to keep your partner safe on stage,” said Technical Director and Adjunct Instructor of Theatre Benjamin Norman.

A few years ago, the Student Government Association awarded Norman a grant to purchase the proper equipment for this workshop.

“SGA has been really amazing,” said Norman. “It was a grant from SGA that bought these practice broadswords. They bought every single one of them. I applied for the grant, and they were super kind and gave them to us. We thank them every day. We couldn’t have done ‘She Kills Monsters’ last semester without them, and we certainly couldn’t be doing this workshop without them. I couldn’t have taught my class without them.”

Although Norman specializes in lighting design, he took an interest in stage combat while in graduate school at University of Southern Mississippi.

“They offered us a stage combat course,” said Norman. “I was in school for lighting design, so I was a bit of an oddball taking an actor’s course. But I took it, and I enjoyed it. So, I ended up finding other ways to get involved with it, other workshops, other courses over the course of the last six years. Recently, I have begun to transition into teacher training, and I am now an apprentice teacher at Dueling Arts International.”

According to Norman, a need for stage combat courses at the university began before he started working here.

“A couple years ago, they did a show called ‘Peter & Tink’ with the theatre program, and they brought in somebody to choreograph the fights,” said Norman. “This was long before I was a member of the university. I think that put a bug in some people. Then they hired me, and I randomly went to Dale Newkirk, my department chair, and Steve Schepker, the director of theatre, and said, ‘Hey, I’d love to offer an introductory class.’ And they were like, ‘Sure, that sounds like a great idea.’ So, we offered it here at Southeastern as a special topics course that would kind of rotate every semester. They had 14 people enroll. They learned broadsword, single sword, knife and unarmed combat. From there, it just snowballed.”

Norman believes last semester’s production of “She Kills Monsters” created a larger interest in stage combat at the university.

“We did ‘She Kills Monsters’ last semester, which I was the fight choreographer for that,” said Norman. “That got a bunch of people really involved and wanting to do more of this. So, this semester is the first time that we are offering what we call a certification workshop, which for Dueling Arts International, is a very specific program where students get 16 contact hours with a weapon and with an instructor. They will then perform a fight scene at the end as a sort of test. If they pass the test, by doing everything they need to do properly and safely, they will then earn themselves a recognition for being a level one theatrical combatant.”

Norman wants to continue teaching this workshop in the future and is looking to hold the next one over spring break 2018.

“Right now we are doing four hours Saturday, Sunday, Saturday, Sunday, and it is intense,” said Norman. “It is really rough on both myself as an instructor and the students. We are completely gassed by the end of it because we are working so hard for so long. Not just our bodies, but our brains because there is so much information. Ideally, over spring break, I would like it to be more classes but shorter and all sequential, which helps with retention and everything else. Yes, I definitely want this to happen again, and I am going to keep working to make it happen again.”

Correction: In an earlier version of this article that was posted on lionsroarnews.com and printed in the Februaray 27th issue of The Lion's Roar, it was stated that the Dueling Arts International instructor pictured was Courtney Callais. Her name is Courtney Calato.